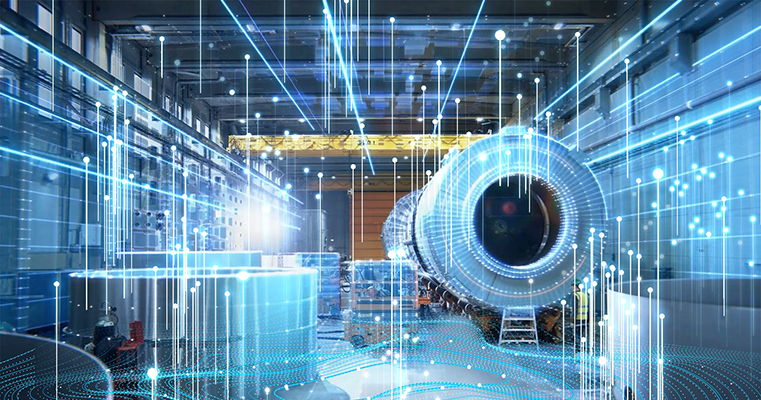 Case studies for effective data generation from the shopfloor

Anyone who wants to implement any digitisation projects at shopfloor level, such as energy management, condition monitoring or preventive maintenance concepts, will be familiar with the challenges: Where to get comprehensive and accurate data? How to keep the cost of infrastructural adjustments at a reasonable level? The focus is first and foremost on the control systems of machines and plants. Their networks are typically self-contained to ensure security and functional reliability. Being able to access the data available in the machine anyway would significantly advance digitisation projects. The network as a whole plays a central role in this context. After all, nothing will stand in the way of a profitable digitisation project if it has been planned to conserve resources while also achieving its goals and optimised to meet all key level requirements of the company. Is this importance already attached to the network?

What is the status quo in industrial facilities today? The primary focus is on implementing the required functions when designing control and network designs in machines and plants. PLC configuration thinking predominates, for example when using PROFINET. The I/O modules, necessary operating and detection systems, scanners, or even cameras are functionally linked based on the local conditions and stored in the PLC configuration. The infrastructure is, therefore, chosen based on the PROFINET certificate, with additional focus on price and manufacturer affinity. No load determinations, bandwidth planning, and performance determinations on infrastructure are applied. There generally is nothing wrong with this approach since it achieves security, function, and stability. However, this does not consider the operator’s potential digitisation projects that are yearning for additional production data from the respective manufacturing process (Fig. 1).

Lack of dialogue between machine builder and operator
The machine builder currently entirely ignores any operator’s desire for digitisation in the design of its network. It primarily considers function, thereby laying out the network for one application only. This complies with the applicable PROFINET directives, for example, and adheres to the required quality parameters, such as those of PI (PROFIBUS & PROFINET International). This is done due to a lack of information about desired additional data or even upcoming digitisation projects. This is rarely described in specifications or has been communicated otherwise. It is a major shortcoming and a frequent obstacle to the success of digitisation projects since the “machine network” data source remains hidden.

Another issue is in the practical experience that the additional traffic caused by acyclic TCP/IP communication can suddenly cause non-reproducible malfunctions, which could usually be countered by compartmentalisation and separation. This unknowingly closes important data sources, which can only be compensated for by drawing on additional resources and costs – second network and additional sensors (Fig. 2).

Energy management case study
It is undisputed that Industry 4.0 has become a necessity. Since experience has shown that the machine and system network is not considered as a direct data source for the background reasons already described, data are obtained in two other possible ways. The first and very common possibility via the process image of the PLC. Apart from the fact that these data often consist of links, are obtained with a time delay, and require additional programming effort, the PLC often does not provide the required data at all. One company made this experience when collecting energy consumption data. These are needed in maintenance to generate a wear map using the difference between the current actually consumed and the nominal current of the consumers, and in environmental and energy management, which wants to avoid expensive load peaks. In this case, a separate network with additional sensors in the form of consumption meters was installed (Fig. 3). Thus, additional investments were made instead of using existing resources.

Ignorance of the actual capacity of the installed machine network required additional resources because existing ones remain unused. Current values of fine granularity (drive-related consumption) can be determined directly from each frequency inverter and made available in a standardised data format via the PROFINET profile “Profi-Drive”. If any proactive discussions were held with the plant manufacturer at an early stage of the project, it would become clear quite quickly that the machine network can and should provide these data directly.

Energy management case study
A machine requires approximately 100 additional sensors for condition monitoring in order to determine the degree of wear of assemblies that are subject to high dynamic loads. A separate network was set up to avoid burdening the machine network, or out of fear that an increased load volume may be generated. Since the investment total of EUR 200,000 calculated for this was almost used up, the number of sensors was reduced to 20; in the end, only five sensors were integrated as data sources. The digitisation project was therefore put “on the back burner” and ultimately did not achieve the planned effect: Budget complied with! Target reached?

Viewing the network as a whole
The network is left out in every discussion on the implementation of digitisation projects. This is done either because it is assumed to be a matter of course, or because it is integrated into the cost calculation as a necessary additional expense. This approach must change if the costs are not to eliminate the effect. Digitisation projects must place a higher priority on the network, its planning, and ultimately its design in particular in greenfield installations. The network is the link between the one who requests data and the data source. An integrated view, under consideration of the most diverse applications, and thus the required bandwidths, guarantees end-to-end communication and the development of the most diverse primary data sources. Autonomous, isolated machine and system networks no longer have a place in the age of digitisation and the associated projects. Networks must be opened up in a planned manner without compromising security, stability, and reliability. They must be considered separately from the application, specified, and put out to tender as one section to reflect all IT and OT issues, including the machine network (Fig. 4). The resulting openness and consistency permit opening up of data sources, reduction of costs, and an enormous increase of digitisation effectiveness.

The network specialists at Indu-Sol are now intensively addressing this issue to make such an approach easier in future. They have made it their task to bring together the different network levels without any obstacles and barriers in close exchange with the operators of OT networks and to bring the “data treasures” to light. The network specialists, who act as project managers, introduce the installer to the requirements of the machine network and work with them to develop the necessary structures. This is based on clear rules that are defined and implemented by IT and OT together. All specifications must be planned, controlled, monitored, and responsibilities must be defined. Then the hidden “data treasure” can then be discovered. Careful use of resources is an important component of profitable digitisation projects.

For more information on the subject, see: